The Hostage Rescue Team (HRT) of the FBI is one of the most important groups that exists. When American citizens are taken hostage by foreign governments, terrorist groups or other actors, the HRT mobilizes to bring these citizens home safely. While the HRT possesses many important components, perhaps the most crucial to their overall operation success is the Assault Team.

Assault Team Operatives, whether working with the HRT or as part of a SWAT team, are responsible for extracting Americans from dangerous situations, which means they must be possessed of advanced skills and undergo rigorous training before being sent on rescue missions. If you’re interested in joining an FBI Assault Team, you should get more information about the duties of this career.

When you are a member of an FBI Assault Team, your primary job responsibility will be to infiltrate buildings, vehicles and other structures in order to apprehend criminals or terrorists and to rescue hostages. While performing these duties, you also must maintain the safety of the public and minimize collateral damage. Due to the importance and intensity of this profession, you must meet specific requirements to become an Assault Team member.

Before becoming an Assault Team member, you are required to work in the field as an FBI agent for at least two years. After completing this two-year requirement, you will have to complete a two-week selection process and then six-months of dedicated Assault Team training. If you are approved to become a member of an Assault Team, you will still perform your regular agent duties until you are called into duty. 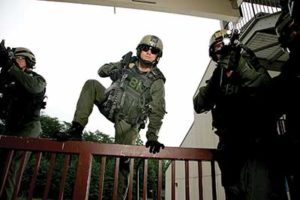 One of the main responsibilities of an Assault Team member is to analyze previous operations and use this information to successfully carry out new missions. The FBI maintains a database of incidences that include hijackings, terrorist attacks and hostage rescues, and the ability to employ this information is an important part of working on an Assault Team.

In addition to certain analyst abilities, members of an Assault Team must also be able to perform many different tasks related to infiltrating a building. For example, when a dangerous situation arises, Assault Team operatives must be able to assess the situation at a moment’s notice and respond just as quickly.

Salaries for an Assault Team Member

There are many factors that are used to determine the salary for an Assault Team operative, including job duties, work experience and military or law enforcement agency rank. Assault Team operatives are paid on the government’s General Schedule (GS) pay scale, and will usually be graded between GS-10 and GS-15. If you work in a supervisory position as part of the HRT Assault Team, you will usually receive GS-14 or GS-15 level pay.

If you have the right physical and mental capabilities and are ready to be called into action whenever you are needed, you can become an Assault Team operative with the FBI.