A counterterrorism fly team is a highly-trained special missions force that is based out of FBI Headquarters in Washington, D.C. and who stands ready to deploy at a moment’s notice anywhere in the world. Their duty is to bring the resources of the FBI to bear alongside other government law enforcement and intelligence agencies, as well as with partner nations overseas, to track down, battle, infiltrate and bring down terrorist networks.

Who Makes Up a Counterterrorism Fly Team?

Counterterrorism fly teams are comprised of a range of outstanding Special Agents and specialists from a variety of focus fields, including field agents, intelligence analysts and others. Becoming part of a fly team requires getting through a detailed and intensive screening process, and operatives must have at minimum five years of field experience.

Following selection, all agents must go through five months of intense training as well as detailed fingerprinting and background checks, as well as fitness exams and training and hostage retrieval procedures.

Scope of a Counterterrorism Team

A Fly Team can be put into life-threatening situations anywhere in the world, at a moment’s notice. Their mandate is to infiltrate terrorist organizations, gather intelligence, and help to bring those organizations down. To this end, they use the highest technology and equipment for communications, data gathering and analysis, and to deliver information.

They can also be called upon to take immediate action against threats, acting to bring down the organizations they’ve infiltrated and investigated. They serve as leadership in FBI field operations against terror forces and are experts at threat and risk assessment. They are invaluable resources whose recommendations are taken seriously by the Bureau, and have the power to establish field command posts. 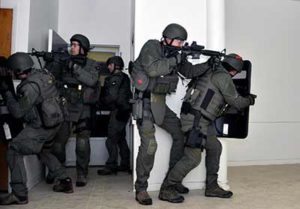 Fly teams perform a range of very specific job duties and have specialized skills, which can include:

As terrorist activities spread across the world, the need for effective, intelligent and brave men and women to work towards bringing these organizations down becomes ever more necessary. This, combined with the strenuous nature of the job, supports the BLS projection of steady growth over the next decade for agents at all levels of the Bureau.

FBI agents, like all federal employees, are paid on a set pay scale called the General Schedule, or GS. This scale has 15 grades, each broken down into 10 steps. FBI agents are paid on GS-10 when they start their service, earning around $46,630 annually in 2017. At step 10, an experienced agent will make $61,922, and the highest ranking and earning agents can improve to higher steps, making well into 6 figures.