Ultimately, the unit supports teams in each of the FBI’s 56 field offices. An Evidence Response Team (ERT) is responsible for collecting evidence so it may be used in court cases within the U.S. or internationally. They model their processes off of the FBI’s high standards for safety, training, equipment and expertise.

Below, we’ll explore what it takes to be part of the FBI’s respected ERTU and how you can join this rewarding career.

In general, ERTs are responsible for collating evidence collected from a crime scene. The job may entail field and lab work using the latest technology and resources to analyze evidence. An ERT may consist of forensic canine consultants, special agents, logistic management specialists, forensic operations specialists and program analysts and managers.

The individual components of the team work together to ensure that a crime scene is completely and thoroughly investigated. For example, a forensic specialist will use standard and ultraviolet photography to document evidence, will collect hair and bodily fluids and will properly save and organize information regarding the crime scene.

A crime scene investigation will also often include fingerprint analysis, DNA testing, chromatography and digital information recovery. An investigation’s ultimate goal is to reconstruct the events which lead up to the crime, and an ERT can help find the link between evidence and suspects.

There is a strict protocol that ERTs must stick to in order to successfully apprehend and prosecute these suspects. For example, crime scene evidence should not be contaminated and lab work must adhere to any relevant rules and procedures. Thus, the job of ERTs can be very meticulous. 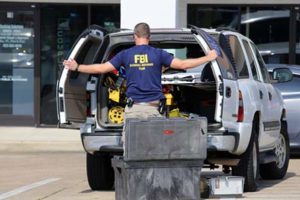 What Does an Evidence Response Team Do?

There are several standard duties that staff members of an ERT can expect to perform. This includes collating evidence from the crime scene, whether physical, digital or photographical, analyzing collected evidence using the most up-to-date methods and technology, using crime scene canines to scan the surrounding geographical area for additional evidence and overseeing the necessary logistics and administration for recording evidence.

The team functions together to make sure all of the job’s duties are correctly and accurately fulfilled.

There are currently 141 ERTs with over 1,100 members within the United States. Other teams are deployed throughout the world to investigate terrorist activities and war crimes.

If you are interested in working within crime scene investigation, consider a career as part of an Evidence Response Team in the FBI.