We often think of FBI as the federal police force, out there to protect us from threats both foreign and domestic within our borders. When someone commits a heinous crime and escapes across state lines, it’s the FBI who comes in to help track them down and bring them to justice. The Bureau helps to protect us against terrorists, working in conjunction with DHS, the CIA and the NSA.

What about when FBI agents need protecting, themselves, however? Few people consider that sometimes security personnel might play a vital role in defending FBI agents. Check out the role of an FBI police officer, how they protect our agents, and the special role they play in keeping you and yours safe and secure from criminal threats.

What Does an FBI Police Officer Do?

Sure, on some level many FBI agents are police officers. A dedicated FBI Police Officer’s job, however, protects FBI personnel. They play a vital role in keeping the FBI safe and the security of surrounding areas. As a career, they serve those working in their duty stations, and they also travel when needed to crisis situations to lend aid and support as needed.

What is an FBI Police Officer’s Jurisdiction?

They specifically have jurisdiction over buildings, land and property that are explicitly occupied or controlled by the Federal Bureau of Investigation and FBI personnel, as well as all members of the public who enter said precincts, buildings and property. They help to enforce laws and maintain social order both within and around FBI facilities. 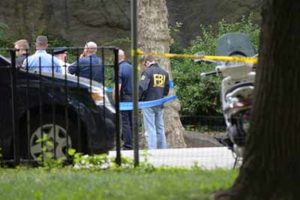 How Do I Become an FBI Police Officer?

The first step is to apply for a job in this capacity at the FBI Jobs website. You’ll need to meet minimum qualifications including being 21 years old, being a U.S. Citizen, having a current valid driver’s license, and meeting the qualifications for top secret security clearance, which involves extensive background and credit checks as well as a polygraph test and employment history check.

Following this, you will need to pass an interview and written exam that measures your cognitive skills and personality. If you pass all of the above, you’ll be put through 12 weeks of training for uniformed police in Georgia, after which follows an advanced FBI Police Training Program at the FBI Academy in Quantico.

How are FBI Police Officers Classified?

FBI Police are classified as professional staff, which places them in the same class as language specialists, intelligence analysts, IT specialists, scientists and other Bureau professionals. FBI Agents are GS-10 pay grade employees, who earn a minimum of $47,630 per year at Step 1.