When the FBI is required to engage with hostile forces, the first operatives to engage with these forces are Sniper/Observers. An FBI Sniper/Observer is a highly-trained marksman that will rank among the best in the world. They will be on the frontline of important FBI operations and are tasked with relaying critical information to the rest of their team.

Whether they work as a member of a SWAT team or as a member of the FBI Hostage Rescue Team, Sniper/Observers will work to protect public safety and eliminate dangerous enemy combatants. Before becoming a Sniper/Observer with the FBI, you need to learn the qualifications of this career and some of the tasks you will be required to perform.

Although aspiring FBI Sniper/Observers will usually already possess some level of law enforcement or military training, the main requirement to enter this profession is to complete the eight-week Marine Corps Sniper School. Once you successfully complete this course, you will be able to join either the HRT or one of the 56 FBI SWAT teams located around the country.

When you are employed as a Sniper/Observer, you will fill two important roles, deployment and beginning negotiations.

In deployment, a Sniper/Observer will infiltrate a hostile area and will gather important intel about enemy forces, including their weapons systems and whether they have hostages. Sniper/Observers can also defend their other team members as the gain tactical positions. 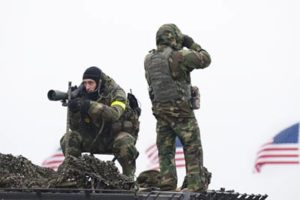 There are several responsibilities of a Sniper/Observer that you should learn about if you’re considering this FBI career. Primarily, a Sniper/Observer is responsible for maintain their elite marksmanship skills so that they are always ready to enter the field. A Sniper/Observer must also possess advanced collaborative skills, as the will often work alongside another Sniper/Observer.

Before becoming a Sniper/Observer, you will also need to develop effective communication skills, as you will regularly have to provide reports to commanders and team members and will also be required to make initial contact with targets.

A successful Sniper/Observer will also be able to keep track of multiple targets, will help develop offensive strategies, provide defensive fire to other FBI personnel and follow the rules of engagement.

Pay Scale for a Sniper/Observer